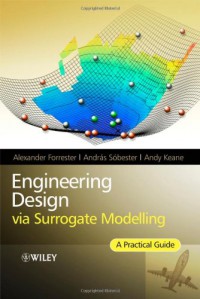 Think of a well-known public personality whom you could easily identify from a photograph.

obscured, except for the corner of an eye, a small part of their chin and, perhaps, a half of

their mouth. This is a game often played on television quiz shows and some contestants (and

only a few small sections of the picture are revealed.

constructing a surrogate model of the full photograph, based on a few samples of it. The key

parts. We know that the photograph represents a human face, that is the image is likely to

be roughly symmetrical, and we know that somewhere in the middle there must be a pattern

we usually refer to as a ‘nose’, etc. Moreover, we know that it is a famous face. The ‘search

an engineering function might look like, based on a few points in space where we can afford

to measure the function values. While these glimpses alone would not tell us much, they

experience of what such functions tend to look like. For example, they tend to be continuous.

We may also assume that their derivatives are continuous too. With such assumptions built

into the learner, the surrogate model becomes a very effective low cost replacement of the

original function for a wide variety of purposes.

and, after many years of combined experience in the subject, it has become a fundamental

element of our engineering thought processes. We wrote this book as a means of sharing

some of this experience on a practical level. While a lot has been written about the deeper

theoretical aspects of surrogate modelling (indeed, references are included throughout this

text to the landmarks of this literature that have informed our own thinking), what we strove

own engineering problems. Of course, like any sharp tool, surrogate modelling can only be

used in a scientifically rigorous way if the user is constantly aware of its dangers, pitfalls,

out at the appropriate times.