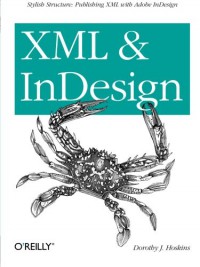 From Adobe InDesign CS2 to InDesign CS6, the ability to work with XML content has

been built into every version of InDesign. Some of the useful applications are importing

database content into InDesign to create catalog pages, exporting XML that will be

useful for subsequent publishing processes, and building chunks of content that can

be reused in multiple publications. XML is used widely with digital-first publishing

In this book, we’ll play with the contents of a college course catalog and you’ll learn how

you can use XML for course descriptions, tables, and other content. Underlying principles

of XML structure, DTDs, and the InDesign namespace will help you develop your

as XHTML, InCopy, and the IDML package. Chapter 10, Advanced Topics:

In this book, I refer to InDesign CS6, and previous versions of the program back to CS3,

generically as “InDesign CS.” When there are important differences in one version’s XML

features, I indicate for which version the screenshot or other information applies. Many

features remain the same from one version to another. Generally, the screenshots are

you want to use InDesign to do something with XML. In particular, I assume that you

throughout an InDesign document or set of documents in the same InDesign template.

(If you are new to these concepts, please refer to Adobe’s InDesign CS built-in