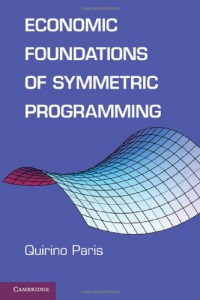 This book formulates and discusses models of producers’ economic behavior

using the framework of mathematical programming. Furthermore, it

introduces the Symmetry Principle in economics and demonstrates its analytical

power in dealing with problems hitherto considered either difficult

or intractable. It assumes that its readers have a beginner’s knowledge of

calculus and linear algebra and that, at least, they have taken an intermediate

The treatment of economic behavior expounded in this book acquires

an operational character that, in general, is not present in a theory course.

In a microeconomics course, for example – even at the graduate level –

the treatment of a monopolist’s behavior considers only one commodity.

Often, however, a monopolist owns demand functions for three or more

commodities (think of Microsoft) and her firm’s equilibrium requires a

careful analysis, especially in the case of perfectly discriminating behavior.

Another example regards the analysis of risk and uncertainty in the

presence of nonzero covariances between risky output market prices and

input supplies. These and many other “realistic” economic scenarios require

the introduction of a structure called the Equilibrium Problem. Although

this specification is the logical representation of quantity and price equilibrium

minimizing objective functions. This book makes it clear that these optimizing

structures are only special cases of the class of Equilibrium Problems

and that, often, they impose unnecessary restrictions on the specification