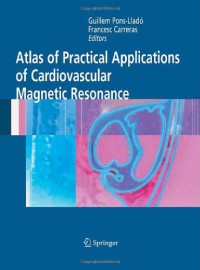 Six years have passed since the edition of our

Fortunately, the technique has experienced

during this time a continuous development

that demanded a new updated version of the

book. One of the consequences of this

growing process has been the adoption of the

(CMR.) to refer to the technique, and this is

why the tide of the present version of the book

has changed slighdy in relation to the first one.

Merits of CMR were evident from its

beginning, early in the eighties. There was a

time, however, when CMR ran the risk of

becoming a luxury diagnostic tool, either

confined to the experimental field or limited

to serve as an occasional resource for selected

selected specialists. Things have changed, for

the benefit of cardiology, during the last few

years, particularly since CMR has proved to be

a very useful technique also in the study of

ischemic heart disease, which constitutes the

main issue of concern in cardiology today. As a

consequence, CMR is starting to play a

relevant role in clinical practice, and it has

become an issue of interest for the educated

cardiologist. Evidence for this is the increasing

body of research articles which, on CMR in

myocardial infarction, for instance, has more

than doubled since 1999 compared with the

five-year previous period, or the pubhcation of

major textbooks on CMR, up to three in the

last two years. Also, there is a strong academical

interest on the technique, with a growing

number of specialized meetings and activities

from associations aimed to spread knowledge

on the technique, as the Society for Cardiovascular

Magnetic Resonance, or the Working

Group on CMR of the European Society of