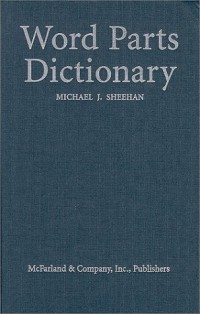 This dictionary is based on word parts — those prefixes, suffixes, com¬ bining forms and roots which show up repeatedly to form words — and is meant to be used in conjunction with a standard dictionary and a thesaurus. It can help to retrieve words only dimly remembered, or it can lead to specific new words which otherwise might never have been discovered. And since a single recurrent letter combination often unlocks the partial meaning of dozens of words, it can act as an efficient way to expand one's general vocabulary. The Word Parts Dictionary is divided into three sections.

Part I, the standard Dictionary, allows a reader to find the meaning of word parts conveniently arranged in alphabetical order, together with an ex¬ ample. For instance, Part I would reveal that the word part -nov- can mean either "new" (for instance, novelty) or "nine" (for instance, novenary), so the user would then become alert to context clues. This section is particularly useful to the person who has set out to expand his or her vocabulary. It is also a convenient place to consult to find actual examples after using Part II. Generally, one example is provided for each meaning.

Part II, the Finder, allows a user to start with a meaning or concept and then find the word parts which express that meaning. It is a reverse dictio¬ nary. For instance, one would learn that the meaning "color" is carried by the word parts chromato-, -chrome, chromo-, -chroous, -pigm-, -tinct-, and -ting-. Armed with that information, a user could then consult his or her memory or turn to the appropriate pages of a standard dictionary to find a variety of words which a thesaurus would not have contained. The alter¬ native to finding such word parts is endless paging through an unabridged dictionary.

Part III, Categories, is also a reverse dictionary, but this time with the word parts arranged in clusters of meaning. For example, Part III would en¬ able a reader to find, in one convenient listing, word parts which express many specific colors. Each color would also appear in Part II, of course, but in an isolated, alphabetical fashion.