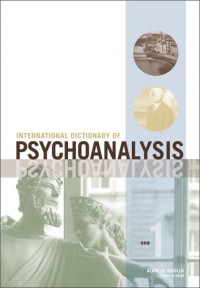 Psychoanalysis is over 100 years old. Over the course of the 20th century, many new terms

and concepts have been added to Freuds original constructs. This evolution has occurred

not just in Vienna, Berlin, or Europe, but rather, all over the world. Consequently, new

community, and despite the existence of an international organization with a rich scientific

program, regularly published journals, and an abundance of meetings and exchanges,

the language of psychoanalysis is not as uniform as one would expect. Some concepts are

of the world. Other ideas are highly developed and given special status in some countries,

while they are unknown or rarely utilized in others. To complicate matters further, schools

of thought have developed with variant degrees of deviation from Freuds metapsychology.

of previous generations, in that there is much more to learn and understand, and a

greater imperative to be in communication with colleagues in other parts of the world. To

integrate the disparate concepts elaborated in different parts of the world, todays practitioner

and anyone interested in the history of psychoanalysis must know, understand, and

be capable of evaluating many divergent ideas and theoretical constructs. Well-informed

dialogue among colleagues from different countries with other perspectives demands that

psychoanalysts have a resource—a handbook, so to speak—that provides a brief, concise,

but nevertheless sufficiently rigorous exposition of the lexicon of the field.