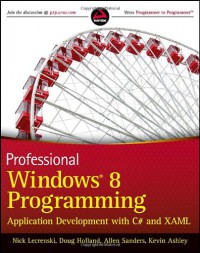 upcoming game-changing operating system: Windows 8. In the Microsoft world for the first time,

among phones, desktop computers, and tablets. Developers would be closer to writing an app

for one device and, with few-to-no modifications, having it run on additional devices. Now that

Windows 8 is finally here, it’s time for you, the developer, to get on board and understand some of

apps for the new Windows Store.

In this book, you learn all about the new development features of Windows 8 and how best to use

them in apps for both the PC and tablet. You see how to use XAML and C# to create a new style of

app that emphasizes content rather than chrome. Windows Store apps are different from traditional

that have historically taken up valuable screen real estate. In addition to a new style of app through

features such as sensors and geolocation. This book walks you through making use of these

new features in your own apps.

Finally, you should be aware that Windows 8 brings massive change in the area of app distribution.

With the release of Windows 8, developers can now access an online app store where they can

easily distribute and sell apps to the massive Windows 8 audience. Step by step, this book shows

Store. The new Windows Store gives you a great way to generate revenue as well as free online

distribution for your apps.

It is an exciting time to be a Microsoft developer, and now that Windows 8 is out in the wild,

you’ll see a massive increase in the demand for quality, content-rich apps in the Windows Store.

These apps must target the PC and tablet, as well as the soon-to-be-released Windows Phone 8.

Professional Windows 8 Programming will guide you through all this, ensuring that you have the

knowledge and tools necessary to create these in-demand apps.