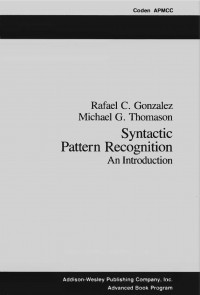 This book was written to provide students, engineers, and scientists

intelligence with a comprehensive introduction to the concepts and tech-

Syntactic pattern recognition is concerned with the application of formal

language and automata theory to the modeling and description of struc-

tural relationships in pattern classes. This is in contrast with classical

decision-theoretic methods, in which recognition is generally performed on

a strictly quantitative basis without explicit use of structural information.

The capability for describing structure is particularly important in pictorial

pattern recognition, scene analysis, and other applications where primitive

elements and their relationships are essential characteristics.

with the development by Noam Chomsky of mathematical models of

grammars related to his work in natural languages. One of the original

goals of linguists working in this area was to develop computational

models of grammars capable of describing natural languages such as

English and French. The hope was that, if this could be done, it would be

guages for the purposes of translation and problem solving. Although it is

generally agreed that these expectations have been unrealized thus far,

impact on other fields, such as compiler design, programming languages,

ments, with results on automated analysis of alphanumeric characters and

human chromosomes appearing in the early 1960s. Since these initial