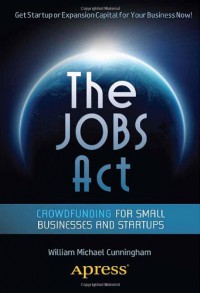 Book: The JOBS Act: Crowdfunding for Small Businesses and Startups

revolution. One need look no further than Egypt, the United Kingdom, the

United States, Syria, or Libya to view the influence that online communities

have had in the political sphere. Now, this power has come to the business

world, specifically the marketplace for equity shares in business startups.

On April 5, 2012, President Obama signed the Jumpstart Our Business

Startups Act, better known as the JOBS Act. The Act is designed to “reopen

companies.” I believe this is one of the most significant legislative initiatives

since the Securities and Exchange Acts of 1933 and 1934. This law changes

A composite of several pieces of proposed legislation,1 the final version of the

JOBS Act, H.R. 3606, was passed by the House of Representatives on March

Association, the U.S. Chamber of Commerce, the International Franchise

Association of Retired Persons and the North American Securities

has indicated that his firm is “not gearing up for the equity wave if it comes.2”