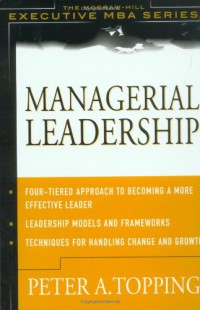 I remember talking in 1995 with Bob Staton, CEO of Colonial Life

& Accident Insurance Company, a division of UNUM, about the

lack of leadership throughout the company. Colonial was one of

when it was acquired by UNUM, the Maine-based disability insurance

company. At first, there was little evidence of the takeover, as

UNUM kept its distance from the folks at Colonial. But as

—particularly when the return on the investment began to erode.

Colonial had been a successful independent company throughout

became increasingly more difficult as the insurance world began to

change. The pressure was mounting for Colonial to produce better

financial results. As a result, Staton and the senior management

team were looking inward, as well as outward, for possible solutions.

new leadership development program for all the managers in the

company. I was interviewing Staton as part of the field research to

design the program. During the conversation, he was quite clear in

expressing his concern that Colonial had too many managers and

not enough leaders. It was too much for me to resist asking him

what the difference was—between a manager and a leader. Staton’s

executives both before and since this conversation.

“Managers,” he said, “wait to be told what to do,” while leaders

“take initiative, figure out what has to be done, and then do it.”

Whatever happened to the value of sound management? It

seems to have become a pariah in the business world. The cry for

getting rid of “managers” and replacing them with “leaders” is

loud and clear. Given the popularity of Drucker’s seminal work,

The Practice of Management, in the 1950s, how far have we fallen? Do

we really need to rid organizations of managers entirely?