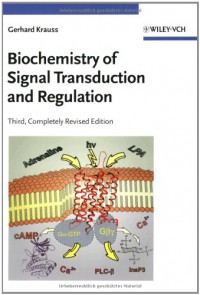 offered to students of biochemistry, biology and chemistry at the University of Bayreuth.

the area of signal transduction and regulation and to follow the progress of this field.

The first book appeared in 1997 and was written in German. It was soon substituted by

pharmacological research and is of central importance in the biomolecular

sciences. Accordingly, the book concentrates on signaling and regulation in animal

systems and in man. Plant systems could not be considered, and results from lower

eukaryotes and prokaryotes are only cited if they are of exemplary character. The enormous

ion channels and nerve signaling found in the former editions. This topic has since

years, and the basic principles of intra- and intercellular signaling are now quite well

established. Signaling processes can be described nowadays more and more on a molecular

level and structure-function relationships of many central signaling proteins

have been worked out. Research on signal transduction is presently focused on the

proteins and their subspecies, on the supramolecular organization of signaling

proteins and on the interplay between different signaling pathways. The enormous

and considers all of the major new achievements. In consequence, not all

branches and fields of signal transduction could be treated here with the same thoroughness.