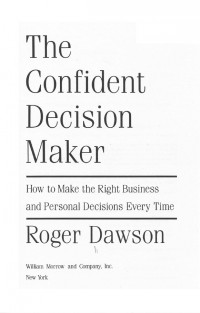 Book: The Confident Decision Maker: How to Make the Right Business and Personal Decisions Every Time

James Michael Goldsmith, a millionaire living in Paris in the late

1950s, had everything going for him-he was the head of a

France's greatest success stories; he had eloped with the beautiful

heiress to a $75 million fortune; and he was only twenty-four

years old. A romance novelist couldn't have dreamed of a more

to change. Because of some tough and extraordinary. decisions

James Goldsmith had made, he was on the brink of financial and

personal ruin. And without a stroke of luck, coincidence, and

some fast thinking, Goldsmith might have been just another gogetter

who burned out too fast, too young.

Dawson has helped hundreds of thousands of people negotiate the best deal with his Secrets of Power Negotiating tape series. Now, after talking to hundreds of top executives about successful and not-so-successful decisions they've made, he reveals the art and science of making excellent decisions.