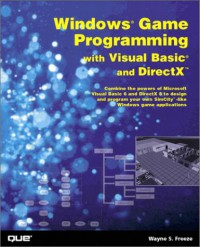 I’ve been fascinated by computer games for years. Some of my first experiences date back to

the late 1960s when I was in junior high school. I was allowed to skip math class once a

week to use an old teletype terminal. I spent hours punching a tic-tac-toe game written in

BASIC onto paper tape so that I could play it when I connected to the mainframe.

In college, I was hooked on a Star Trek game written in BASIC that ran on a Hewlett

Packard 2000 timesharing computer. I spent many hours playing the game and discussing

strategy with my classmates. One summer, a few friends and I created a more advanced version

of the game based on a source code listing we found in Creative Computing, one of the

Later, I spent a lot of time playing Adventure (also known as The Colossal Cave), which

was created by a pair of MIT students, Willie Crowther and Don Woods, on a mainframe

computer. This game used phrases like “You are standing at the end of a road before a small

brick building” to create images in your mind. It was the first of an entire genre of computer

Back then, I didn’t care much for labels, I just wanted to beat the game. I created lots of

notes but wasn’t able to beat it. Fortunately, the source code for the game was readily available.

I studied the source code and eventually defeated it with a perfect score.

The first time I saw SimCity, I thought the entire premise for the game seemed dumb. My

wife, on the other hand, thought it was an interesting concept, so she bought it anyway. She

asked me to install in on our computer early the next morning. Eight hours later she found

me still at the computer, playing the game. I hadn’t left my seat! Ever since then, I’ve always

been first in line each time a new version of SimCity came out.