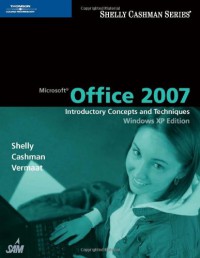 The Shelly Cashman Series® offers the fi nest textbooks in computer education. We are

have been the most widely used books in education. With each new edition of our Offi ce

books, we have made signifi cant improvements based on the software and comments made

by the instructors and students.

than all other previous versions combined. Learning how to use Offi ce 2007 will create an

impact the way that students are taught skills, the Shelly Cashman Series development

Offi ce student. An extensive customer survey conducted in the Fall of 2005 produced

results confi rming what the Series is best known for: its step-by-step, screen-by-screen

instructions, its project-oriented approach, and the quality of its content.

We learned, though, that students entering computer courses today are different

than students taking these classes just a few years ago. Students today read less, but need

to retain more. They need not only to be able to perform skills, but to retain those skills

and know how to apply them to different settings. Today’s students need to be continually

engaged and challenged to retain what they’re learning.

As a result, we’ve renewed our commitment to focusing on the user and how they learn

best. This commitment is refl ected in every change we’ve made to our Offi ce 2007 books.