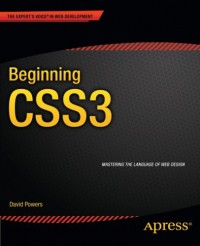 CSS3 is the latest version of Cascading Style Sheets, the language that in the hands of a skilled designer turns

the ugly duckling of unadorned HTML into the gracious swan of a sophisticated web page. Some web designers

will tell you dismissively that CSS3 won’t be ready for years. In one sense, they’re right. Instead of one massive

specification, CSS3 has been broken up into more than 40 modules, some of which are unlikely to gain formal

approval for a long time. But the first modules are already complete, while others have reached a high level

of stability and are widely implemented by browsers. What’s more, CSS3 embraces the whole of the previous

version, CSS2.1, a formal standard that’s supported by all browsers in widespread use.

This book covers not only the new parts of CSS3, but also those inherited from CSS2.1. Even ancient

browsers, such as Internet Explorer (IE) 6 and 7, support most of CSS2.1. So, you’ll find large parts of this book

relevant even if you still need to support older browsers.

Because CSS is constantly evolving, this book inevitably represents a snapshot in time (August 2012). But I’ve

tried to structure the content in such a way that it will remain relevant even when new modules begin to mature.

New modules will add extra features rather than supersede what’s covered in this book.