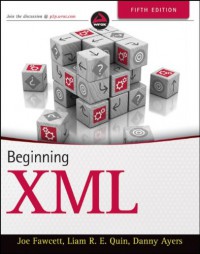 THIS IS THE FIFTH EDITION OF A BOOK that has proven popular with professional developers and academic institutions. It strives to impart knowledge on a subject that at fi rst was seen by some as just another fad, but that instead has come to maturity and is now often just taken for granted. Almost six years have passed since the previous edition — a veritable lifetime in IT terms. In reviewing the fourth edition for what should be kept, what should be updated, and what new material was needed, the current authors found that about three-quarters of the material was substantially out of date. XML has far more uses than fi ve years ago, and there is also much more reliance on it under the covers. It is now no longer essential to be able to handcraft esoteric confi guration fi les to get a web service up and running. It has also been found that, in some places, XML is not always the best fi t. These situations and others, along with a complete overhaul of the content, form the basis for this newer version.

So, what is XML? XML stands for eXtensible Markup Language, which is a language that can be used to describe data in a meaningful way. Virtually anywhere there is a need to store data, especially where it may need to be consumed by more than one application, XML is a good place to start. It has gained a reputation for being a candidate where interoperability is important, either between two applications in different businesses or simply those within a company. Hundreds of standardized XML formats now exist, known as schemas, which have been agreed on by businesses to represent different types of data, from medical records to fi nancial transactions to GPS coordinates representing a journey.

A complete update covering the many advances to the XML language

The XML language has become the standard for writing documents on the Internet and is constantly improving and evolving. This new edition covers all the many new XML-based technologies that have appeared since the previous edition four years ago, providing you with an up-to-date introductory guide and reference. Packed with real-world code examples, best practices, and in-depth coverage of the most important and relevant topics, this authoritative resource explores both the advantages and disadvantages of XML and addresses the most current standards and uses of XML.

Beginning XML, Fifth Edition delivers the most important aspects of XML in regard to what it is, how it works, what technologies surround it, and how it can best be used in a variety of situations.