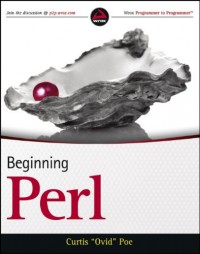 That was the subtitle for this book that was sadly, but wisely, rejected. However, it conveys two

things about this book that I’ve tried to focus on: getting a job and having fun while learning the

skills you need. Well, as much fun as you can reasonably have while learning how to program.

Although many books aren’t explicit in this intent, I’ll say it up front: This book is about money.

Information Technology (IT) workers are in high demand, even during the current economic downturn,

language, but also on surveys that have been conducted regarding “Perl in the wild.” That’s

why you’ll fi nd an astonishing decision in this book: We focus on Perl versions 5.8 and 5.10. They’re

no longer offi cially supported, but these are the versions of Perl that most companies still use.

so the code in this book still runs on the latest versions of Perl. As a result of this focus, by the time

you fi nish this book, you’ll have the skills necessary to accept many Perl jobs.

I fi rst conceived of a Perl book aimed at developing job skills when I was living in Portland, Oregon.

Later, I moved to London and made a few inquiries about working on it, but to no avail. Then I

moved to Amsterdam and started working with Wrox to create this book. I’m now living in Paris

and am fi nishing this book. The common thread in all those cities is that Perl opened up the door

for jobs. With many other excellent dynamic programming languages, such as PHP, Python, and

Ruby fi ghting for the same slice of the pie, some Perl developers moved to other languages, leaving

companies in need of developers to maintain their code and build new systems in Perl. Perl developers

are in high demand, and this book is about meeting that demand.

Lest you think that Perl is just for maintaining legacy code, I can assure you that plenty of companies,

large and small, are still turning to Perl as their fi rst choice of programming language. It’s

of open source code dedicated to a single language. Many times you’ll fi nd that rather than needing

to write new code to solve a tricky problem, you can turn to the CPAN and fi nd that someone’s

I’ve been paid to program in many languages, including 6809 Assembler (boy, did I just date myself,

but I keep coming back to Perl. Why? Well, why not? It’s a powerful language. If your programming

needs are CPU-bound, such as in real-time ray tracing, then Perl may not be the best choice, but otherwise,

it’s an excellent language. I tend to work on large-scale database-driven applications, and the

performance issues there are usually located in the network, the database, or the fi le system. You’d

have the same performance issues regardless of the programming language, so you may as well

choose a language that you enjoy.