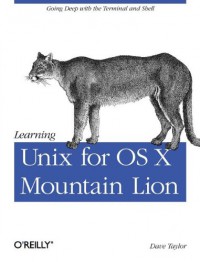 the more complicated and graphically rich world of OS X. Many of you reading this

ten” to sound cool). The biggest change when Apple switched operating systems was

that every machine then gained multitasking and multiuser capabilities.

What you might not have realized, however, is that it was the underlying operating

system itself that changed in the update to OS X, and that you now have a tremendously

the Net, along with a command-line interface that makes even the most complex tasks

If you want to learn the key phrases, beneath OS X lies an operating system called Unix

users to share the same system, each with their own settings, preferences, and separate

area in the filesystems, secured from other users’ prying eyes. Being multitasking means

OS X can easily run many different applications at the same time, and if one of those

applications crashes or hangs, the entire system doesn’t need to be rebooted. Instead,

know, when the mouse pointer turns into a spinning color wheel that just won’t stop

rotating) and either relaunch it or proceed with your work in other apps.

Think your Mac is powerful now? Author Dave Taylor shows you how to get much more from your system by tapping into Unix, the robust operating system concealed beneath OS X’s beautiful user interface. Mountain Lion puts more than a thousand Unix commands at your fingertips—for finding and managing files, remotely accessing your Mac from other computers, and using a variety of freely downloadable open source applications. Take a friendly tour of the Unix command line and 50 of the most useful utilities, and quickly learn how to gain real control over your Mac.

Get your Mac to do exactly what you want, when you want

Make changes to your Mac’s filesystem and directories

Create unique "super-commands" to perform tasks that you specify

Run multiple Unix programs and processes at the same time