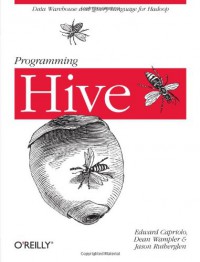 Programming Hive introduces Hive, an essential tool in the Hadoop ecosystem that

Hadoop Distributed Filesystem (HDFS), other filesystems that integrate with Hadoop,

Most data warehouse applications are implemented using relational databases that use

SQL as the query language. Hive lowers the barrier for moving these applications to

Hadoop. People who know SQL can learn Hive easily. Without Hive, these users must

easier for developers to port SQL-based applications to Hadoop, compared to other

tool options. Without Hive, developers would face a daunting challenge when porting

their SQL applications to Hadoop.

Still, there are aspects of Hive that are different from other SQL-based environments.

Documentation for Hive users and Hadoop developers has been sparse. We decided

to write this book to fill that gap. We provide a pragmatic, comprehensive introduction

to Hive that is suitable for SQL experts, such as database designers and business analysts.