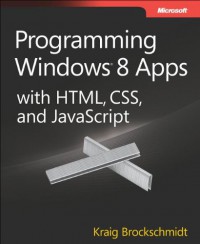 Welcome, my friends, to Windows 8! On behalf of the thousands of designers, program managers, developers, test engineers, and writers who have brought the product to life, I'm delighted to welcome you into a world of Windows Reimagined.

This theme is no mere sentimental marketing ploy, intended to bestow an aura of newness to something that is essentially unchanged, like those household products that make a big splash on the idea of "New and Improved Packaging!" No, Microsoft Windows truly has been reborn—after more than a quarter-century, something genuinely new has emerged.

I suspect—indeed expect—that you're already somewhat familiar with the reimagined user experience of Windows 8. You're probably reading this book, in fact, because you know that the ability of Windows 8 to reach across desktop, laptop, and tablet devices, along with the global reach of the Windows Store, will provide you with tremendous business opportunities, whether you're in business, as I like to say, for fame, fortune, fun, or philanthropy.

We'll certainly see many facets of this new user experience throughout the course of this book. Our primary focus, however, will be on the reimagined developer experience.

I don't say this lightly. When I first began giving presentations within Microsoft about building WinRT apps, as they are called (and also referred to as Windows Store apps in consumer contexts), I liked to show a slide of what the world was like in the year 1985. It was the time of Ronald Reagan, Margaret Thatcher, and Cold War tensions. It was the time of VCRs and the discovery of AIDS. It was when Back to the Future was first released, Michael Jackson topped the charts with Thriller, and Steve Jobs was kicked out of Apple. And it was when software developers got their first taste of the original Windows API and the programming model for desktop applications.

The longevity of that programming model has been impressive. It's been in place for over a quarter-century now and has grown to become the heart of the largest business ecosystem on the planet. The API itself, known today as Win32, has also grown to become the largest on the planet! What started out on the order of about 300 callable methods has expanded three orders of magnitude, well beyond the point that any one individual could even hope to understand a fraction of it. I'd certainly given up such futile efforts myself.