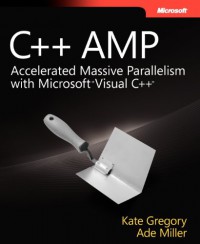 For most of computing history, we benefited from exponential increases in performance

of scalar processors. That has come to an end. We are now at the dawn of

the heterogeneous parallel computing era. With all applications being power-sensitive

and all computing systems being power-limited, from mobile to cloud, future computing

platforms must embrace heterogeneity. For example, a fast-growing portion of the

clusters. While the first-generation programming interfaces such as CUDA and OpenCL

have enabled development of new libraries and applications for these systems, there

goals. C++ AMP from Microsoft is a major step forward in addressing this challenge.

The C++ AMP interface is a simple, elegant extension to the C++ language to address

two major weaknesses of previous interfaces. First, the previous approaches did not

models tend to disturb the class organization of applications. Second, their

construct to address the second issue. The array_view approach is forward-looking and

architectures. Many experienced CUDA and OpenCL programmers have found the

Equally importantly, in my opinion, the C++ AMP interface opens the door for a

wide range of innovative compiler transformations, such as data layout adjustment and

optimizations on data movement. Such advancements will be needed for a

While C++ AMP is currently only implemented on Windows, the interface is open

and will likely be implemented on other platforms. There is great potential for the

vendors begin to offer their implementation of the interface.