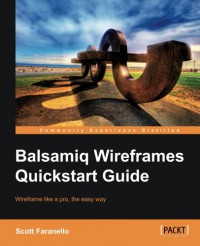 for a software company in Chicago. Until that point in my career, I had been

layouts in HTML and CSS, and spending a lot of time learning prototype software

Now, these are all great tools and should be explored fully. But, my role with this

company was different. I was working as a user-experience architect alongside a

large agile team of developers. In an environment such as this, it meant that I no

complex clickable prototypes. Instead, I now had to work faster, more efficiently, and

deliver creative concepts that were clear and concise, but in a fraction of time. There

was simply no time to wireframe in Photoshop or code HTML, and to be honest,

Axure was just too cumbersome, personally speaking, for doing quick and dirty

designs that my development team demanded. Then, I discovered Balsamiq.

I was first introduced to Balsamiq by a developer on my team. He had been using

it to sketch rough ideas to share with his development colleagues. Of course, I was

immediately impressed. After all, developers are not known as the visual folks

on the team, as much as working with detailed, text heavy requirements, and raw

programming code. So, when I learned that a developer was already using the tool

effectively, I knew I had to learn more.

From the moment I launched Balsamiq Mockups, its value was immediately

apparent. Gone were the complicated toolbars with multiple menu options to

learn. Gone too were the long hours toiling over hi-fidelity Photoshop mockups or

tweaking handcoded HTML and CSS. With Balsamiq, I was able to design simple,

concise, and effective designs using simple graphics and in half the time! As a result,

questions early. Plus, with Balsamiq's ability to make simple, clickable prototypes, I

could impressively present my ideas to the team with ease.