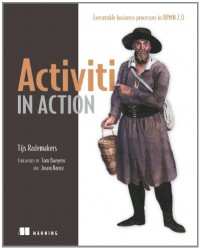 Writing this book was a life-changer for me. After I wrote Open Source ESBs in Action for

Manning a few years ago, I focused on my daily job for some time, working with open

Integration. My work, over time, drove me to designing and developing processes and

BPM, and I started using jBPM and WebSphere Process Server. Then I learned that the

founder of the jBPM project, Tom Baeyens, was leaving JBoss to work on a new open

source project, which was in stealth mode at that time (early 2010). When the first

alpha version of Activiti was released, I told myself I had to contribute to that project,

one way or another.

plug-in. I had some email conversations with Tom about contributing the plug-in to

Activiti. We met and he told me that his goal was to disrupt the process engine space

with the Activiti project. My enthusiasm grew even more and I offered my time to start

working on a first version of the Activiti Designer. Together with my former colleagues,

Tiese Barrell, Yvo Swillens, and Ron van Liempd, we were able to deliver a

first version within a couple of months.

As we became part of the Activiti developer community, my hands were itching to

start writing a book about Activiti. I felt that a great open source process engine would

need a detailed book to describe all the possibilities and potential it offers. Manning

was eager to publish a book about Activiti, and, together with Ron, we started writing

in the autumn of 2010. We had a hard time keeping up with the frequent releases and

the new functionality that kept on coming. But, it also was a lot of fun to be able to

write about a new functionality that was just (or about to be) released.