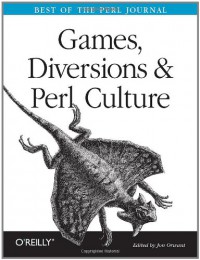 This is the third of three “Best of The Perl Journal” O’Reilly books, containing the créme de la créme of the 247 articles published during The Perl Journal ’s five-year existence as a standalone magazine. This particular book contains 47 articles about the leisure pursuits of Perl programmers. You won’t find articles on web development or object-oriented programming here. This book is for relaxing and reveling in Perl culture—a mindset favoring programs that are weird, wacky, and hubristic.

The Perl Journal (TPJ) did something most print journals aspire to, but few succeed. Within a remarkable short time, TPJ acquired a cult-following and became the voice of the Perl community. Every serious Perl programmer subscribed to it, and every notable Perl guru jumped at the opportunity to write for it. Back issues were swapped like trading cards. No longer in print format, TPJ remains the quintessential spirit of Perl–a publication for and by Perl programmers who see fun and beauty in an admittedly quirky little language.

Games, Diversions, and Perl Culture is the third volume of The Best of the Perl Journal, compiled and re-edited by the original editor and publisher of The Perl Journal, Jon Orwant. In this series, we've taken the very best (and still relevant) articles published in TPJ over its 5 years of publication and immortalized them into three volumes.

The 47 articles included in this volume are simply some of the best Perl articles ever written on the subjects of games, diversions, and the unique culture of this close-knit community, by some of the best Perl authors and coders. Games, Diversions & Perl Culture focuses on entertaining topics that make Perl users such fanatics about the language. You'll find all of the playful features TPJ offered over the years, including the Obfuscated Perl Contests, Perl Quiz Shows, humor articles, and renowned one-line recipes. The book also contains a panoply of quirky applications of Perl, including genetic algorithms, home automation, music programming, and an entire section on natural language processing.

This anthology is an unmatched compendium of Perl lore.