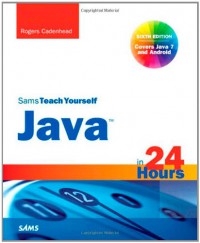 As the author of computer books, I spend a lot of time lurking in the computer

section of bookstores, observing the behavior of readers while I’m

pretending to read the latest issue of In Touch Weekly magazine.

Because of my research, I’ve learned that if you have picked up this book

and turned to the introduction, I have only 12 more seconds before you

So I’ll keep this brief: Computer programming with Java is easier than it

looks. I’m not supposed to tell you that because thousands of programmers

have used their Java skills to get high-paying jobs in software development,

persistence and a little free time can learn this language, the most popular

programming language in use today. By working your way through each

of the one-hour tutorials in Sams Teach Yourself Java in 24 Hours, you’ll be

program a DVR. Java is one of the best programming languages to learn

because it’s a useful, powerful, modern technology that’s embraced by

thousands of programmers around the world.

This book is aimed at nonprogrammers, new programmers who hated

learning the subject, and experienced programmers who want to quickly

get up to speed with Java. It uses Java 7, the version of the language just

Java is an enormously popular programming language because of the

things it makes possible. You can create programs that feature a graphical

user interface, design software that makes the most of the Internet, read

XML data, create a game that runs on an Android cell phone, and more.