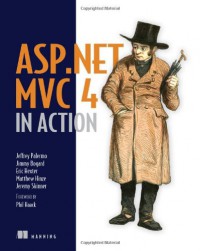 The ASP.NET MVC framework has come a long way over the last few years.

It was originally the vision of Scott Guthrie in early 2007, and with a subsequent

Manager, this vision became a reality. Several public previews of the framework were

released over the following year, followed by the final release of ASP.NET MVC 1.0 in

At a time when many web developers in the .NET community were becoming frustrated

Web Forms was losing favor. Developers struggled to make it do things for which it was

never initially intended, and for many developers with a web background, the complexities

of the page lifecycle and the pseudo-stateful model were very alien concepts.

ASP.NET MVC aimed to solve this problem by positioning itself as an alternative

platform to Web Forms for developing web applications on the .NET platform. Taking

inspiration from other frameworks such as Rails, MonoRail, and others, ASP.NET MVC

provided a much cleaner way for .NET developers to build web applications.

With the second major release in March 2010, ASP.NET MVC 2 added support for several

important features that were missing from the first release (such as validation, areas,

and templated helpers). Now with ASP.NET MVC 4, Microsoft has built on an already

HTML, and the framework embraces many of the new features introduced with .NET 4.