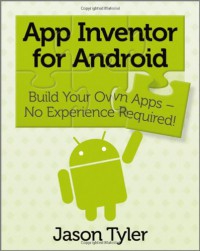 Book: App Inventor for Android: Build Your Own Apps – No Experience Required!

When Android was first introduced by Google and the Open Handset Alliance, my first thought was of how awesome it would be to have a free open-source application environment for the growing smart phone revolution. The harsh reality hit when I tried to apply my rusty programming skills to the Java and Android software development kit (SDK). The learning curve was too steep, with too few rewards to keep me going. Then Google announced the amazing App Inventor, which makes it possible for anyone to build Android applications. I was excited and my hope for building my own applications was renewed. As I have learned, played with, and grown with App Inventor, I have been amazed at what non-experts (including me) can build with this tool. After having spent a few months with App Inventor, I have found my journey to traditional Java and SDK development much easier, more fun, and less frustrating.

This book is for anyone from a complete computer newbie to an experienced designer and developer. It will help anyone familiarize themselves with the App Inventor interface and components.

App Inventor for Android: Build Your Own Apps — No Experience Required! is also great for designers or developers with great ideas and a solid background in development. App Inventor can allow very technical and experienced app developers to spend less time worrying about debugging, syntax, and development and more time making rock-star applications.