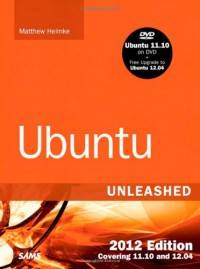 We are pleased to present the 2012 edition of Ubuntu Unleashed. Ubuntu is a Linuxbased computer operating system that has taken the world by storm. From its humble beginning in 2004, Ubuntu has risen to be the vanguard of desktop Linux, as well as a popular choice for servers.

Ubuntu descends from one of the oldest and most revered Linux distributions, Debian. Debian is assembled by a team of talented volunteers, is one of the most stable and customizable distributions of Linux, and is well respected for its quality and technological prowess. It is, however, an operating system for geeks; the bar for entry into the Debian realm is set high, and its user base tends to be highly proficient and expects new users to learn the ropes before joining in. That is both appropriate and okay.

What Ubuntu has done is leverage the quality of Debian to create an operating system that ordinary people can use. That doesn’t mean that Ubuntu users are not technologically proficient, just that they do not have to be. In fact, many talented and respected software developers love Ubuntu because it allows them to concentrate on their specific interests instead of the details of the operating system. This book is for these people and for those who aspire to joining their ranks.

If you are new to Linux, you have made a great decision by choosing this book. Sams Publishing’s Unleashed books offer an in-depth look at their subjects, taking in both beginner and advanced users and moving them to a new level of knowledge and expertise. Ubuntu is a fast-changing distribution that has an updated release twice a year. We have tracked the development of Ubuntu from early on to make sure that the information in this book mirrors closely the development of the distribution. A full copy of Ubuntu is included on the enclosed disc, and it is possible for you to install Ubuntu from that disc in less than an hour!