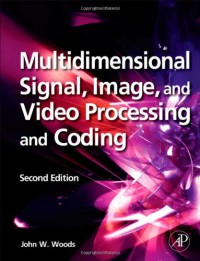 This is a textbook for a first- or second-year graduate course for electrical and computer
engineering (ECE) students in the area of digital image and video processing
and coding. The course might be called Digital Image and Video Processing (DIVP)
or some such, and has its heritage in the signal processing and communications areas
of ECE. The relevant image (and video) processing problems can be categorized as
image-in/image-out, rather than image-in/analysis-out types of problems. Though for
this second edition, we have broadened our coverage by adding introductory material
on image analysis.

The required background is an undergraduate digital signal processing (DSP)
course and a course in probability. In addition, some knowledge of random processes
and information theory is required for some sections. So in this second edition, we
have added introductory material on random processes and information theory in
chapter appendices. In addition to its role as a graduate text, the book is also suitable
for self-study by graduate engineers with a communications and signal processing
background.

The DIVP course at Rensselaer Polytechnic Institute has been offered for the last
20 years, now on an alternate year basis, having started as a course in multidimensional
DSP. Over the years we brought in an emphasis first on image processing and
coding, and then on video, and finally, some coverage of network transmission of
video. The book, as well as the DIVP course, starts out with two-dimensional (2-D)
signal processing theory, including 2-D systems, partial difference equations, Fourier
and Z-transforms, filter stability, discrete transforms such as DFT and DCT and their
fast algorithms, ending up with 2-D or spatial filter design.We also introduce the subband/
wavelet transform (SWT) here, along with coverage of the DFT and DCT. This
material is contained in the first five chapters and constitutes the first part of the book.

However, there is also a later chapter on 3-D and spatiotemporal signal processing,
strategically positioned between the image and the video processing chapters.
The second part of the book, comprising the remaining seven chapters, covers
image and video processing and coding, along with the introduction to video transmission
on networks. We start out with image perception and sensing, followed by
basic filters for image processing, and then treat image enhancement and image analysis.
This is followed by four individual chapters on estimation/restoration and source
coding, first for images and then for video. The final chapter on network transmission
summarizes basic networking concepts and then goes on to consider effects of packet
loss and their amelioration.