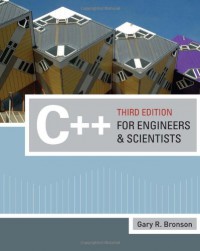 Book: C++ for Engineers and Scientists

The C++ programming language, which includes C as a proper subset, has become the
preeminent programming language in the engineering and scientific fields. For most
engineers and scientists, however, using the full potential of C++, which is a hybrid language
containing both structured and object-oriented features, involves a gradual refinement of
programming skills from a structured approach to an object-oriented one. One reason for this
is that many engineering and scientific problems can be solved efficiently and conveniently
by using only C++’s structured elements.

Now in its third edition, Bronson's C++ for Engineers and Scientists makes C++ accessible to first-level engineering students as C++ maintains its stronghold in engineering and scientific communities. The text continues to take a pragmatic approach that incorporates actual engineering and science problems for its applications and examples. Students begin with a foundation in procedural programming, moving into object-oriented concepts in the second half of the text. This new edition also offers new case studies and an expanded selection of examples from a variety of fields including thermodynamics, optics, and fluid mechanics.