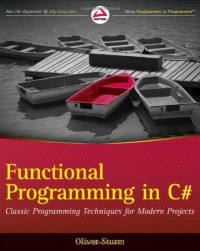 FUNCTIONAL PROGRAMMING is an important paradigm of programming that looks back on
a long history. The subject has always been very relevant to people who teach others how to
program — the clean and logical concepts of functional programming lend themselves especially
well to teaching. Certain industries that use computers and self – written programs heavily have also
found functional programming to be the most productive approach for their purposes. However,
for many of the “ mainstream ” software manufacturers, functional programming has long held an
air of the academic and they widely chose to use approaches with an imperative heritage, like object
orientation.

In recent years, more and more functional elements have been included in imperative languages on
the .NET platform, and with Visual Studio 2010, F# has been included — the fi rst hybrid functional
language in the box with Microsoft ’ s mainstream development platform. Even more than the
functional features that have been introduced to C# and VB.NET, this shows a commitment on
Microsoft ’ s side.