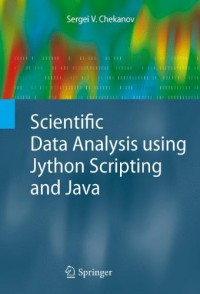 Over the course of the past twenty years I have learned many things relevant to
this book while working in high-energy physics. As everyone in this field in the
yearly to mid-90s, I was analyzing experimental data collected by particle colliders
using the FORTRAN programming language. Then, gradually, I moved to C++
coding following the general trend at that time. I was not too satisfied with this
transition: C++ looked overly complicated and C++ source codes were difficult
to understand. With C++, we were significantly constrained by particular aspects
of computer hardware and operating system (Linux and Unix) on which the source
codes were compiled and linked against existing libraries. Thus, to bring the analysis
environment outside the high-energy community to the Windows platform, used by
most people, was almost impossible.

I began serious development of ideas that eventually led to the jHepWork Java
analysis environment in 2004, when I was struck by the simplicity and by the
power of the Java Analysis Studio (JAS) program developed at the SLAC National
Accelerator Laboratory (USA). One could run it even on the Windows platform,
which was incredible for high-energy physics applications; We never really used
Windows at that time, since high-energy physics community had wholly embraced
Unix and Linux as the platform of choice, together with its build-in GNU C++ and
FORTRAN compilers. More importantly, JAS running on Windows had exactly the
same interface and functionality as for Unix and Linux! It was a few months after
that I made the decision to focus on a simplified version of this Java framework
which, I thought, should befit from Java scripting, will be simpler and more intuitive.
Thus, it should be better suited for general public use. I have called it “jHepWork”
(“j” means Java, “HEP” is the abbreviation for high-energy physics, and “work”
means a sedentary lifestyle in front of a computer monitor).