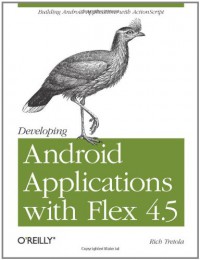 The Android mobile operating system was first introduced in the fall of 2008 as part
of the G1 handset. Android began to gain some momentum as major device manufactures
like Motorola, HTC, Sony, and Samsung adopted Android to run on their hardware.
As the number of available devices began to grow (allowing mobile customers a
wide range of choices), the number of Android handsets being activated each day increased
dramatically. Android’s operating system continued to evolve through versions
1.0, 1.5, 1.6, 2.0, 2.1—and then 2.2, which was the point at which Adobe AIR became
available within the Android market. The number of Android devices running 2.2 or
higher continues to grow, which means that the user base for applications based on the
methods discussed in this book is also expanding.

This book will walk you through the creation of your first Adobe AIR application using
the Flex 4.5 framework, and provides examples of how to interact with the device’s
many components and features. These include GPS, the camera, the gallery, the accelerometer,
the multitouch display, the StageWebView, operating system interactions, and
more.