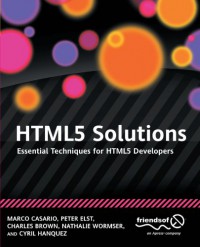 The development of Hypertext Markup Language stopped in 1999 with its final version, n.4, made by the
World Wide Web Consortium (W3C). Technology, however, has not stood still in the meantime: the W3C
also worked on interesting projects such as the generic Standard Generalized Markup Language (SGML)
to XML, as well as on new markup languages such as Scalable Vector Graphics (SVG), XForms, and
MathML.

Web browser vendors, on the other hand, preferred to concentrate on new functions for their programs,
whereas web developers started to learn CSS and the JavaScript language to build their applications on
frameworks that use Asynchronous JavaScript + XML (AJAX).

However, things have changed, and recently HTML has been brought back to life thanks to the work of the
companies such as Apple, Google, Opera Software, and the Mozilla Foundation, who collaborated (under
the name of WhatWG, the Web Hypertext Application Technology Working Group) on the development of
an updated and enhanced version of the old HTML.

Following this major interest, the W3C began to work on a new version of HTML, called HTML5, taking on
the official name of Web Applications 1.0 and introducing new structural elements to HTML that have not
been seen before.

The new elements introduced by HTML5 tend to bridge the gap between structure, defined by the markup;
rendering characteristics, defined by styling directives; and the content of a web page, defined by the text
itself. Furthermore, HTML5 introduced a native open standard to deliver multimedia content such as audio
and video, collaboration APIs, local storage, geolocation APIs, and much more.

In this practically-oriented book, we wanted to provide a series of solutions to common problems faced by
people approaching the new language. You will therefore find a lot of ready-to-use code that you can build
on in your web applications.