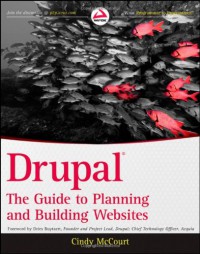 Book: Drupal: The Guide to Planning and Building Websites

This book is about directing diverse forces toward a unifi ed goal: the completion of a web project.
While the goal in this case is very specifi c — a Drupal website — in many ways, it outlines successful
steps for completing any life project, including Drupal itself.

I started the Drupal project in my dorm room in 2001, with no expectation that it would ever
become big outside my circle of friends. But it grew, leaving that circle to power KernelTrap.org
(which still runs on Drupal) and then, famously, the website for Howard Dean’s 2004 presidential
campaign. Drupal’s gone through three major updates since then, and each time the Drupal community
learns more about how to apply project management techniques to its development.

But, as with many projects, planning for Drupal was often ex post facto. I wrote it for a small,
specifi c purpose: when it escaped the confi nes of my expectations, the Drupal community had to
refactor it, sometimes ripping out large sections. Partly such changes were necessary because we
wanted to take advantage of new web technologies, such as RDF for Drupal 7 and HTML5 for
Drupal 8. But, sometimes they were because we didn’t have a systematic method to plan and build.

This book provides that systematic method — but for Drupal websites. Few are the web builders
who haven’t created a “quick and dirty” site at some point in their careers, and then regretted it
later when they had to make changes. We know why we do it: we’re in a rush and don’t think the
project is worth the extra time.

However, once you learn proper planning techniques, you’ll fi nd that they don’t add time to your
project, because they reduce the number of revisions and corrections needed later. That’s why I’m
excited about this book. It will help people build Drupal websites the right way. And the more
Drupal sites that are built well from the beginning, the better people will feel about Drupal overall.

The proof that Ms. McCourt understands her subject is in your hands, for this book is an expression
of her ability to direct diverse forces toward a unifi ed goal. I hope that it helps you harness the
forces affecting your own Drupal website project, and look forward to seeing the results.