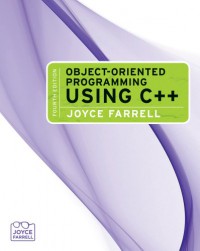 Comprehensive, engaging explanations, multiple programming examples, and step-by-step programming
lessons provide beginning readers with a solid C++ background. Users who know some C++ syntax, but are
new to object-oriented programming, will find objects explored thoroughly from the first chapters. Objects
are introduced early, so those who want to learn objects at the start of their programming experience can
do so. Users who want to postpone objects can simply omit the later sections of each chapter and cover the
basic programming structures with simple data types before returning to the more complex objects later on.

Using object-oriented terminology from the start, Object-Oriented Programming Using C++, Fourth Edition, will provide readers with a solid foundation in C++ programming. Like its predecessors, the fourth edition uses clear, straightforward examples to teach both the syntax of the C++ language and sound programming principles. It begins with an overview of object-oriented programming and C++, and then builds upon this knowledge to teach increasingly complex concepts, such as inheritance, templates, handling exceptions, and advanced input and output. Aimed at providing readers with the most current programming knowledge, this edition has been updated to reflect the latest software, Visual C++ 2008.