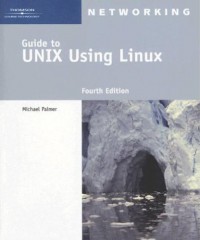 Guide to UNIX Using Linux, Fourth Edition is updated to include new UNIX/Linux distributions,
networking utilities, new UNIX/Linux capabilities, and coverage of both the
GNOME and KDE desktops.The large array of commands, utilities, file systems, and other
information you learn here applies to any Linux system and most UNIX systems.Within the
book four modern Linux operating systems are spotlighted as examples: Fedora, Red Hat
Enterprise Linux, SUSE, and Knoppix.

Today UNIX and Linux operating systems are popularly used on all types of computers
including desktops, portables, and servers. UNIX was the first popular operating system used
with the extensive computer network that has become the Internet, and remains a staple of
computing. Linux is a UNIX-like operating system first released in 1991 and has become
immensely popular for all types of computing applications. Chances are that the next time
you access an Internet server it will be running UNIX or Linux.Also, because of strong customer
demand, many computer manufacturers offer pre-installed Linux versions on desktop
and server computers.

A huge range of software is available for UNIX and Linux systems, including many free or
low-cost applications. Through the X Window System and desktop software such as
GNOME and KDE, UNIX and Linux provide a graphical user interface that is as versatile
and easy to use as on any operating system. At the same time, UNIX and Linux have
retained powerful capabilities that can be accessed through time-tested command line interfaces.
In short, UNIX and Linux give you the best of two worlds, comprehensive command
features and unbeatable graphical interface options.

The concepts you learn in this book help prepare you to use UNIX and Linux on all types
of computer systems, including PCs, workstations, servers, and mainframe computers.
Through this book you learn to use command-line features, run utilities, create your own
applications, and use the GNOME and KDE desktops—giving you a comprehensive foundation
in UNIX and Linux.

Taking a hands-on, practical approach, this book guides you through UNIX and Linux system
and programming concepts.You practice what you learn through self-guided Hands-On
Projects, Review Questions, and Discovery Exercises.Your learning is facilitated by a proven
combination of tools that powerfully reinforce both concepts and real-world experience.