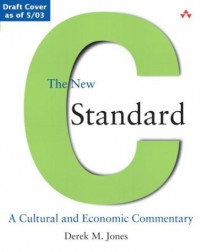 Book: The New C Standard: A Cultural and Economic Commentary

This book contains a detailed analysis of the International Standard for the C language,-3.1 excluding the
library from a number of perspectives. The organization of the material is unusual in that it is based on
the actual text of the published C Standard. The unit of discussion is the individual sentences from the C
Standard (2022 of them).

Readers are assumed to have more than a passing familiarity with C.

My involvement with C started in 1988 with the implementation of a C to Pascal translator (written in
Pascal). In 1991 my company was one of the three companies that were joint first, in the world, in having
their C compiler formally validated. My involvement with the world of international standards started in
1988 when I represented the UK at a WG14 meeting in Seattle. I continued to head the UK delegation at
WG14 meetings for another six years before taking more of a back seat role.

Having never worked on a C++ compiler or spent a significant amount of time studying C++ my view on this
language has to be considered as a C only one. While I am a member of the UK C++ panel I rarely attend
meetings and have only been to one ISO C++ Standard meeting.

There is a close association between C and C++ and the aim of this subsection is the same as the C90 one:
document the differences.