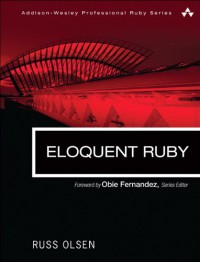 Do you know why experienced Ruby programmers tend to reach for basic collections
and hashes while programmers from other languages go for more specialized classes?
Do you know the difference between strip, chop, and chomp, and why there are three
such similar methods when apparently one might suffice? (Not to mention lstrip and
rstrip!) Do you know the downsides of dynamic typing? Do you know why the differences
between strings and symbols get so blurry, even to experienced Ruby developers?
How about metaprogramming? What the heck is an eigenclass? How about
protected methods? Do you know what they’re really about? Really? Are you sure?

Russ knows all that stuff and more. And if books are like babies, then Russ is that
experienced mom who pops out her second child after a couple of hours of labor and
is back at work a week later in her pre-pregnancy clothes as if nothing out of the ordinary
happened. You know: the one all the other moms talk about in hushed tones of
disbelief and reverence. That’s the way my series authors discuss Russ.

Not that there’s anything small or insignificant about Russ’ bouncing new baby . . .
eh, I mean book. On the contrary, weighing in at just over 400 pages, this tome is
slightly larger than its older sibling Design Patterns in Ruby. The family resemblance is
crystal clear: Russ is first and foremost your friend. His approachable writing style
makes even the driest Ruby language topics engaging and funny. Like the way that
symbols remind Russ “of the eyes peering out from the tilted head of a confused but
friendly dog.”