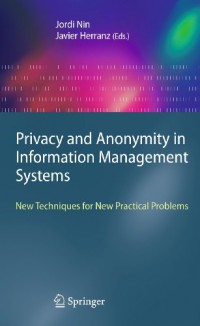 As depicted in David Lodge’s celebrated novel Small World, the perceived size of our world experienced a progressive decrease as jet airplanes became affordable to ever greater shares of the earth’s population. Yet, the really dramatic shrinking had to wait until the mid-1990s, when Internet became widespread and the information age stopped being an empty buzzword. But small is not necessarily beautiful. We now live in a global village and, alas, some (often very powerful) voices state that we ought not expect any more privacy in it. Should this be true, we would have created our own nightmare: a global village combining the worst of conventional villages, where a lot of information on an individual is known by the other villagers, and conventional big cities, where the invidual feels lost in a grim and potentially dangerous place.

The development of information technologies in the last few years has been remarkable. Large amounts of data are collected and stored by both public institutions and private companies every day. There are clear threats to the privacy of citizens if no care is taken when collecting, storing and disseminating data. Ensuring privacy for individuals in a society when dealing with digital information, is a task which involves many agents, including politicians, legal authorities, managers, developers, and system administrators. Privacy and Anonymity in Information Management Systems deals with the more technical parts of this `privacy cycle', those issues that are mostly related to computer science, and discusses the process by which different privacy mechanisms are motivated, designed, analyzed, tested and finally implemented in companies or institutions. The book is written in such a way that several of the chapters are self-contained and accessible to students, covering topics such as the problem of Statistical Disclosure Control (SDC), i.e. how to modify datasets that contain statistical information before publicly releasing them, and doing so in such a way that the privacy of the confidential original information is preserved; and specific distributed applications involving privacy – how different agents have private inputs but want to cooperate to run some protocol in their own interest, without revealing unnecessary parts of their private inputs. Graduate students and researchers will find this book an excellent resource.