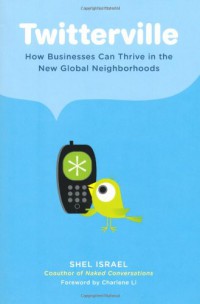 Book: Twitterville: How Businesses Can Thrive in the New Global Neighborhoods

Twitter is the most rapidly adopted communication tool in history, going from zero to ten million users in just over two years. On Twitter, word can spread faster than wildfire. Companies no longer have the option of ignoring the conversation.

Unlike other hot social media spaces, Twitterville is dominated by professionals, not students. And despite its size, it still feels like a small town. Twitter allows people to interact much the way they do face-to-face, honestly and authentically. One minute, you're com- plaining about the weather with local friends, the next, you're talking shop with a colleague based halfway across the globe.

No matter where you're from or what you do for a living, you will find conversations on Twitter that are valuable. Despite the millions of people joining the site, you'll quickly find the ones who can make a difference to you.

Social media writer Shel Israel shares revealing stories of Twitterville residents, from CEOs to the student who became the first to report the devastation of the Szechuan earthquake; from visionaries trying to raise money for a cause to citizen journalists who outshine traditional media companies.

Israel introduces you to trailblazers such as:

* Bill Fergus, who was on the team at Henry Ford Medical Center during the first "live tweeted" surgery

* Scott Monty, social media officer for Ford, who held off a mob of misinformed Ranger fans and averted a PR crisis

* Connie Reece, who used Twitter to raise tens of thousands of dollars for cancer patients in need

* The Coffee Groundz, a Houston-area coffee shop that uses Twitter to pack the tables (and fight off Starbucks)

Twitterville features many true stories as dramatic as these. But it also recounts those of ordinary businesspeople who use Twitter to get closer to their customers. And it explains how global neighborhoods will make geography increasingly irrelevant.

It even explains why people sometimes really do care what you had for lunch.