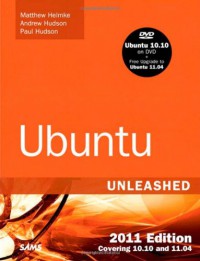 We are pleased to present the 2011 edition of Ubuntu Unleashed. Ubuntu is a Linux-based computer operating system that has taken the world by storm. From its humble beginning in 2004, Ubuntu has risen to be the vanguard of desktop Linux, as well as a popular choice for servers.

Ubuntu descends from one of the oldest and most revered Linux distributions, Debian. Debian is assembled by a team of talented volunteers, is one of the most stable and customizable distributions of Linux, and is well respected for its quality and technological prowess. It is, however, an operating system for geeks; the bar for entry into the Debian realm is set high, and its user base tends to be highly proficient and expects new users to learn the ropes before joining in. That is both appropriate and okay.

What Ubuntu has done is leverage the quality of Debian to create an operating system that ordinary people can use. That doesn’t mean that Ubuntu users are not technologically proficient, just that they do not have to be. In fact, many talented and respected software developers love Ubuntu because it allows them to concentrate on their specific interests instead of the details of the operating system. This book is for these people and for those who aspire to joining their ranks.

Ubuntu Unleashed 2011 Edition presents advanced coverage of the popular Ubuntu distribution of Linux. Windows users, Mac users, and Linux enthusiasts have been increasingly turning to Ubuntu for a user-friendly and easy-to-use Linux distribution that remains useful to power users.

This book provides detailed information on installing, using, and administering Ubuntu. You will learn how to set up a workstation or a server, details on Ubuntu’s easy-to-use desktop and productivity software, and you will find topics of interest to both casual and serious developers.

Ubuntu Unleashed 2011 Edition includes a range of coverage: From the software you need everyday for productivity and enjoyment, to how to configure your Linux desktop to run smoothly, to advanced topics like systems administration and software development, and much more.

Some books excel at helping beginners take baby steps. There is some beginning material in Ubuntu Unleashed 2011 Edition. However, this book is intended for anyone who wants to move beyond the basics of using Ubuntu into the realm of an intermediate or advanced user.

Get all your system’s devices and peripherals up and running

Secure your machine and your network from intruders

Get productive with office tools

Set up and run various types of servers

Learn how to write a software application quickly

Tune your system for maximum performance

Learn to manage and compile the kernel and modules