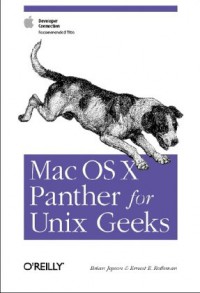 Once upon a time, Unix came with only a few standard utilities. If you were lucky, it included a C compiler. When setting up a new Unix system, you’d have to crawl the Net looking for important software: Perl, gcc, bison, flex, less, Emacs, and other utilities and languages. That was a lot of software to download through a 28.8-Kbps modem. These days, Unix distributions come with many more features, and more and more users are gaining access to a wide-open pipe.

Free Linux distributions pack most of the GNU tools onto a CD-ROM, and now commercial Unix systems are catching up. Solaris comes with a companion CD of free software including a big selection of GNU utilities, and just about every flavor of Unix (including Mac OS X) now includes Perl. Mac OS X also comes with many tools, most of which are open source and complement the tools associated with Unix.

This book serves as a bridge for Unix developers and system administrators who’ve been lured to Mac OS X because of its Unix roots. When you first launch the Terminal application, you’ll find yourself at home in a Unix shell. However, Apple’s credo is “Think Different,” and you’ll soon find yourself doing things a little differently. Some of the standard Unix utilities you’ve grown accustomed to may not be there, /etc/passwd and /etc/group have been supplanted with something called Directory Services, and when it comes to developing applications, you’ll find that things like library linking and compiling have a few new twists to them.

Despite all the beauty of Mac OS X’s Aqua interface, you’ll find that some things are different on the Unix side. But rest assured, the changes are easy to deal with if you know what to do. This book is your survival guide for taming the Unix side of Mac OS X.