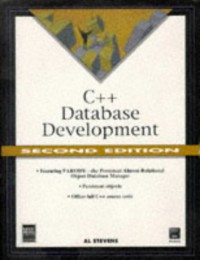 In 1987, I wrote the first edition of C Database Development, a book that describes how to build database software applications with a subset of the relational data model implemented in the C language. That bookincluded the C source code for a database management system and implemented a design approach in which the programmer uses the features of C to define an application's database. In the approach taken by that book, C serves the traditional functions of the data definition and data manipulation languages, which are usually implemented as separate languages in formal DBMSs.

In 1991, after the ANSI X3J11 committee completed the standard definition of C, I wrote a second edition of C Database Development, which used the same methods but with Standard C. Both editions of that book continue to be widely read, and programmers throughout the world have used the software in these books to develop many diverse applications. The principle is tried and proven.

The first edition of C++ Database Development in 1992 continued  that tradition with the C++ programming language and the object-orienteddata model-not with a wrapper around the old C function library, but instead with a completely new C++ class library called PARODY that uses the object-oriented features of C++ to implement what has come to be known as persistent objects.