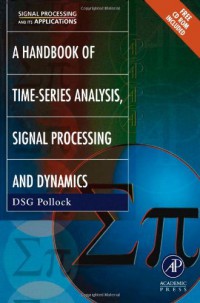 It is hoped that this book will serve both as a text in time-series analysis and signal processing and as a reference book for research workers and practitioners. Timeseries analysis and signal processing are two subjects which ought to be treated as one; and they are the concern of a wide range of applied disciplines including statistics, electrical engineering, mechanical engineering, physics, medicine and economics.

The book is primarily a didactic text and, as such, it has three main aspects. The rst aspect of the exposition is the mathematical theory which is the foundation of the two subjects. The book does not skimp this. The exposition begins in Chapters 2 and 3 with polynomial algebra and complex analysis, and it reaches into the middle of the book where a lengthy chapter on Fourier analysis is to be found.

The second aspect of the exposition is an extensive treatment of the numerical analysis which is specically related to the subjects of time-series analysis and signal processing but which is, usually, of a much wider applicability. This begins in earnest with the account of polynomial computation, in Chapter 4, and of matrix computation, in Chapter 7, and it continues unabated throughout the text. The computer code, which is the product of the analysis, is distributed evenly throughout the book, but it is also hierarchically ordered in the sense that computer procedures which come later often invoke their predecessors.

The third and most important didactic aspect of the text is the exposition of the subjects of time-series analysis and signal processing themselves. This begins as soon as, in logic, it can. However, the fact that the treatment of the substantive aspects of the subject is delayed until the mathematical foundations are in place should not prevent the reader from embarking immediately upon such topics as the statistical analysis of time series or the theory of linear ltering. The book has been assembled in the expectation that it will be read backwards as well as forwards, as is usual with such texts. Therefore it contains extensive cross-referencing.

The book is also intended as an accessible work of reference. The computer code which implements the algorithms is woven into the text so that it binds closely with the mathematical exposition; and this should allow the detailed workings of the algorithms to be understood quickly. However, the function of each of the Pascal procedures and the means of invoking them are described in a reference section, and the code of the procedures is available in electronic form on a computer disc.

The associated disc contains the Pascal code precisely as it is printed in the text. An alternative code in the C language is also provided. Each procedure is coupled with a so-called driver, which is a small program which shows the procedure in action. The essential object of the driver is to demonstrate the workings of the procedure; but usually it fulls the additional purpose of demonstrating some aspect the theory which has been set forth in the chapter in which the code of the procedure it to be found. It is hoped that, by using the algorithms provided in this book, scientists and engineers will be able to piece together reliable software tools tailored to their own specic needs.

« MEMS: Applications (The MEMS Handbook, Second Edition)
The Rosetta Bone: The Key to Communication Between Humans and Canines »