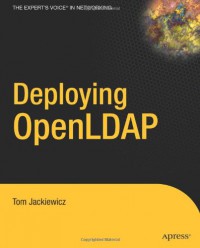 …I was excited to see Deploying OpenLDAP, by Tom Jackiewicz and published by Apress, on Amazon's electronic bookshelf. After reviewing the Table of Contents I quickly ordered the book.

For all the work and time invested in using LDAP, not enough time has been spent designing the layout and the logic of directories. End users and system architects often don't give appropriate attention to the deployment of LDAP as a standards-based system with interfacing ability. Thus, many of LDAP's best features&emdash;especially OpenLDAP&emdash;become unusable.

As a remedy, Deploying OpenLDAP delves into the logic, theories and fundamentals of directories. The text focuses on open standards, rather than proprietary systems&emdash;which are expensive and incompatible with other systems. If you already know advanced programming implementation, but don't fully understand how all pieces fit together , then this book will surpass explaining, "what is," and instead show you, "how to."