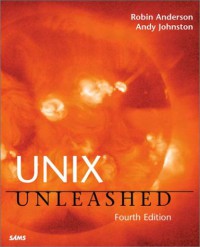 Using Solaris 8 and Linux 7.1 as their reference flavors, Robin Anderson and Andy Johnston (as well as a slew of contributors) show how to be a system administrator–and get all sorts of other work done–in the fourth edition of Unix Unleashed. Significantly different from its predecessors, this book stays generally clear of very basic matters, as well as subjects of interest primarily to software developers. The middle ground that’s left–and there is a lot of it, as this book spans more than 1,100 mostly unillustrated pages–is the knowledge that a system administrator needs. Since lots of the people who work with Unix are administrators (either of databases, Internet sites, or some other kind of back-end resource), the shift in focus makes sense.
The authors employ a style that’s nicely suited to the personality of administrators, as well as their job. To satisfy the "job" side of the equation, there are "best practices" sections that recommend how to configure various pieces of the system. For the "personality" side, there’s rather a lot of explanatory material to explain why the best practices are what they are, and why they’re not without flaw. There’s very little step-by-step guidance in these pages. The authors instead prefer to use prose to explain solid thought processes: "This is what we want to accomplish (say, harden a system before it’s connected to the network), here are the issues associated with that goal (known openings in default configurations, known techniques that attackers use, and so on), and here are the tools and procedures recommended for combating those problems." It’s an excellent approach for administrators who approach their jobs as engineering problems. –David Wall
Topics covered: How to be a Unix system administrator with deep knowledge of all of your machine’s critical subsystems. Sections deal with configuring, defending, and performance-optimizing mail services, Web services, authentication, printing, and applications. There is, unfortunately, not enough information on firewalls. About the Author
Robin Anderson began her involvement with computers innocently enough with an Amiga, WordPerfect, and Infocom games. In late 1993, she turned her hand to student consulting at the University of MD, Baltimore County (UMBC), working with PCs, Macs, VAXen, and, finally, UNIX machines.
After graduating with honors in Computer Science and History, Robin remained at UMBC and is now a UNIX SysAdmin Specialist in OIT (UMBC’s Office of Information Technology). She also managed OIT’s Operations Support Staff and is a member of the Security Work Group.
Robin developed and taught an undergraduate UNIX SysAdmin course for UMBC’s CS/EE department in 2000. She has earned two security certifications from the SANS Institute: the GCUX (UNIX Administrator, with honors) and the GCIH (Incident Handling). She works with SANS to develop online exam materials and presentations, and she recently taught SANS LevelOne security courses for UMBC’s Department of Professional Education and Training.
Andy Johnston was born in May of 1958. Most of the rest has been improvisation. After teaching high school math, he became a programmer. He worked for the State of Maryland making population projections and lots of maps, and later for Computer Sciences Corporation, where he worked on spacecraft-tracking software and environmental modeling. One day, the UNIX system in which his virtual fish swam suffered a drive crash, and he (quickly) became a UNIX systems administrator. Andy provided system support for several projects, including the International Ultraviolet Explorer. In 1999, he took his current position at the University of Maryland, Baltimore County (UMBC)Office of Information Technology as a manager of UNIX support staff and IT security. Andy holds a Bachelor’s degree in Biology from Princeton University and a Master’s degree in Mathematics from UMBC. He has been involved at various times in the Baltimore and Washington, D.C. SAGE groups and has spoken at SANS conferences.