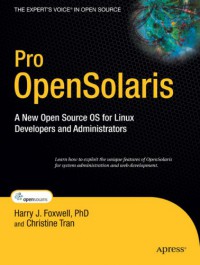 OpenSolaris is a rapidly evolving operating system with roots in Solaris 10, suitable for deployment on laptops, desktop workstations, storage appliances, and data center servers from the smallest single–purpose systems to the largest enterprise–class systems. The growing OpenSolaris community now has hundreds of thousands of participants and users in government agencies, commercial businesses, and universities, with more than 100 user groups around the world contributing to the use and advancement of OpenSolaris. New releases of OpenSolaris become available every six months, with contributions from both Sun engineers and OpenSolaris community members; this book covers the OpenSolaris 2008.11 release.
Pro OpenSolaris was written to demonstrate that you can host your open source applications and solutions on OpenSolaris, taking advantage of its advanced features such as containers and other forms of virtualization, the ZFS file system, and DTrace. It’s assumed that you are already fairly knowledgeable about developing on Linux systems, so the authors give an overview of the similarities and differences between Linux and OpenSolaris, and then present details on how to use the Service Management Facility (SMF), ZFS, zones, and even a bit of DTrace. They also provide pointers to the many project communities associated with new OpenSolaris features. Special focus is given to web development using familiar applications such as Apache, Tomcat, and MySQL, along with the NetBeans IDE, and showing you how to exploit some of OpenSolaris’s unique technologies.
What you’ll learn

Discover the secrets of the ZFS, the most powerful file system ever conceived
Explore OpenSolaris AMP (Apache, MySQL, PHP) and GlassFish in the context of Web 2.0 and Linux/Solaris, respectively
Familiarize yourself with the new security administration features of OpenSolaris, including changes in DTrace

Who is this book for?
Linux system administrators and programmers who would like to know what they have missed since Solaris became an open source operating system.
About the Apress Pro Series
The Apress Pro series books are practical, professional tutorials to keep you on and moving up the professional ladder.
You have gotten the job, now you need to hone your skills in these tough competitive times. The Apress Pro series expands your skills and expertise in exactly the areas you need. Master the content of a Pro book, and you will always be able to get the job done in a professional development project. Written by experts in their field, Pro series books from Apress give you the hard–won solutions to problems you will face in your professional programming career.
About the Author
Harry Foxwell is a system engineer for Sun Microsystems Federal, Inc., specializing in operating system support (Solaris, OpenSolaris, and Linux). He is also an adjunct professor of computer science at George Mason University, where he has taught, among other classes, operating system courses based on OpenSolaris. He has also written several book reviews for ACM’s Computing Reviews.

« The Evolution of Hominin Diets: Integrating Approaches to the Study of Palaeolithic Subsistence
Aircraft Performance & Design »