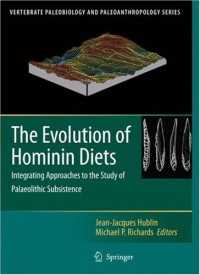 Book: The Evolution of Hominin Diets: Integrating Approaches to the Study of Palaeolithic Subsistence

This volume brings together new and important research from the top experts in hominid diets across multiple fields. The objective of the volume is to explore if there is a consensus between the different methods, allowing us to better understand the nature of hominin dietary strategies through time. Contributions focus on modern studies, faunal studies, physical anthropology, archaeological studies, and isotopic studies, all aimed at answering the major questions of the evolution of hominid diets, such as: meat-eating emergence, hunting vs. scavenging, hunting technologies, and resource intensification in later humans.
‘Assembling a rich blend from the realms of archaeology, paleoanthropology and isotopic analysis, this excellent text confronts the perennial question: what was our ancestral diet?’ Henry Schwarcz, McMaster University, Ontario, Canada
‘This masterful multidisciplinary synthesis of human dietary evolution is simply a must-have reference for all biological anthropologists, archaeologists and palaeoanthropologists interested in our past.’ Leslie Aiello, Wenner-Gren Foundation for Anthropological Research
About the Author
Jean-Jacques, Hublin, Ph.D., is currently a Professor at the Max Planck Institute for Evolutionary Anthropology in Leipzig (Germany), where he also serves as the Director of the Department of Human Evolution. Initially his research focuses on the origin and evolution of Neanderthals and he has proposed an accretion model for the emergence of the Neandertal lineage that roots it in time in the middle of the middle Pleistocene. He also worked on the processes associated with the emergence of Homo sapiens and on the interactions between Neanderthals and anatomically modern humans in Europe. He developed the use of medical and virtual imaging in the reconstruction and study of fossil hominids and paid attention to the growth and development issues. He has led field operations in North Africa, Spain and France. In addition to his scientific papers, he has regularly published popular books (with translations in English, Italian, Spanish and Chinese) and articles on the subjects of Neanderthal and early modern human evolution. Significant past research and teaching appointments include: Deputy Director for Anthropology, Prehistory and Paleo-environmental Sciences, Centre National de Recherche Scientifique (2000-2003), Researcher, Centre National de Recherche Scientifique (1981-2000), Visiting Professor, University of California at Berkeley (1992), Harvard University (1997) and Stanford University (1999), Elected member of the French National Committee of Scientific Research (1991-2000).

Michael P. Richards is a Professor at the Department of Human Evolution where he runs the archaeological science group. His research interests primarily involve isotope analysis in archaeology, palaeoanthropology and palaeontology, especially for reconstructing past diets and migration patterns. Most of his research has involved the application of stable isotope analysis (C and N) of bone collagen to determine human and animal diets, and especially diet shifts, in Prehistoric and Historic Europe. Particular areas of interest are the shift in diet between the Mesolithic and Neolithic periods in Europe, associated with the adoption of agriculture, and contrasting the diets of Neanderthals and modern humans in Europe. Mike’s current research involves the use of other isotopes to reconstruct climate and migration patterns, as well as the extraction and isotopic analysis of proteins preserved in old or poorly preserved bone and teeth. Mike studied at the Department of Archaeology, Simon Fraser University, Canada (BA and MA), and the Research Laboratory for Archaeology and the History of Art, University of Oxford, UK (Ph.D.). He held post-doctoral positions at both institutions. He was a Lecturer, Reader and Professor at the Department of Archaeological Sciences, University of Bradford, UK, a position mainly funded by the Wellcome Trust Bioarchaeology programme. In addition to his current post as Professor at the MPI in Leipzig, he also holds a part-time post at the University of Durham, UK, as Professor of Archaeology. Mike’s research has been published in journals such as Nature, PNAS, AJPA, JAS, and Current Anthropology.