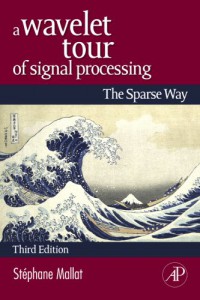 I cannot help but find striking resemblances between scientific communities and schools of fish. We interact in conferences and through articles, and we move together while a global trajectory emerges from individual contributions. Some of us like to be at the center of the school, others prefer to wander around, and a few swim in multiple directions in front.To avoid dying by starvation in a progressively narrower and specialized domain, a scientific community needs also to move on. Computational harmonic analysis is still very much alive because it went beyond wavelets. Writing such a book is about decoding the trajectory of the school and gathering the pearls that have been uncovered on the way.Wavelets are no longer the central topic, despite the previous edition’s original title. It is just an important tool, as the Fourier transform is. Sparse representation and processing are now at the core.In the 1980s,many researcherswere focused on building time-frequency decompositions, trying to avoid the uncertainty barrier,and hoping to discover the ultimate representation. Along the way came the construction of wavelet orthogonal bases, which opened new perspectives through collaborations with physicists and mathematicians. Designing orthogonal bases with Xlets became a popular sport with compression and noise-reduction applications. Connections with approximations and sparsity also became more apparent. The search for sparsity has taken over, leading to new grounds where orthonormal bases are replaced by redundant dictionaries of waveforms.During these last seven years, I also encountered the industrial world. With a lot of naiveness, some bandlets, and more mathematics, I cofounded a start-up with Christophe Bernard, Jérome Kalifa, and Erwan Le Pennec. It took us some time to learn that in three months good engineering should produce robust algorithms that operate in real time, as opposed to the three years we were used to having for writing new ideas with promising perspectives. Yet, we survived because mathematics is a major source of industrial innovations for signal processing. Semiconductor technology offers amazing computational power and flexibility. However, ad hoc algorithms often do not scale easily and mathematics accelerates the trial-and-error development process. Sparsity decreases computations,memory, and data communications. Although it brings beauty, mathematical understanding is not a luxury. It is required by increasingly sophisticated information-processing devices.